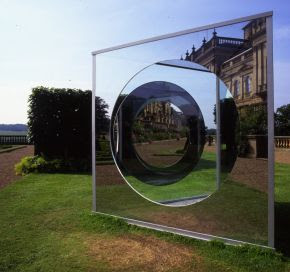 Portavilion is a portable public art project being held in various parks in London during the summer as part of the London Festival of Architecture (runs until July 20) and features the work of several wellknown contemporary artists who were asked to "explore the possibilities for temporary, large scale public art". Above is Dan Graham's 'Triangular Pavilion With Circular Cut-Out Variation H'. I'm showing my ignorance here, but apparently Graham is considered the “guru” of artists' pavilions and his aim is to "produce a sense of uneasiness and psychological alienation through a constant play between feelings of inclusion and exclusion." Which is what it's like most days in my garden office. This one is a mixture of transparent glass and two-way mirrors with a clear glass ceiling and is inspired by Chinese garden pavilions, rococo mirror pavilions,19th century gazebos and urban bus shelters. 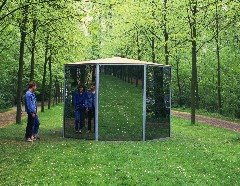 Below is Annika Eriksson's 'The Smallest Cinema in the World – For the Wealthy and the Good', a six seater cinema which will show her own short films. 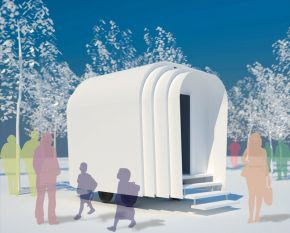 There are also pavilions by Monika Sosnowska and Toby Paterson.
Thanks to Emma Townshend for the tipoff
Posted by Alex Johnson at 4:14 PM