Religious Sheds Week: The Priory Chapel And Cathedral Church Of Our Lady 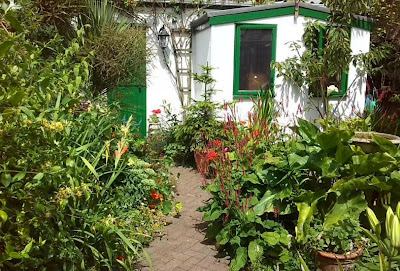 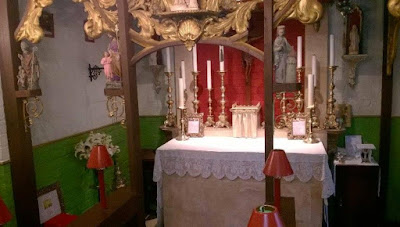 Continuing this week's religious theme, another new entry for this year's Shed of the Year competition is the Priory Chapel of the Congregation of Brothers of the Merciful Love of God (and also the Cathedral Church of the Bishop of the Ecumenical Catholic Church UK).

A private place of worship in a domestic home in Portsmouth, the Priest Administrator is Fr Julian Kent, CFMD, ordained in the Anglican Church of Australia and now incardinated into the United Ecumenical Catholic Church, UK Diocese. Full sung services are celebrated regularly, usually traditional in style and according to the English Missal and the Book of Common Prayer (1662), typically Solemn Mass and Solemn Evening Prayer with Benediction, at which attendance is by personal invitation.

As well as the daily Mass, the Parish Mass is offered here on the 2nd, 4th and 5th Sundays of the month. Other sacraments and services may be arranged by request, including Baptism, Confirmation (by consultation with the bishop), Confessions (Sacrament of Reconciliation), Requiem Mass, Funerals, home/hospital visits, home Communion, Holy Anointing, prayers for particular need or thanksgiving.

Tuesday posts are sponsored by Garden Spaces, suppliers of contemporary garden buildings, offices, gyms and studios, many of which do not require planning
Posted by Alex Johnson at 4:24 PM 0 comments 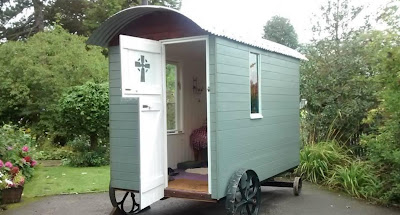 We're running a week-long series of posts over the next five days celebrating the overlap between sheds and religion. To start us off, here is 'Hilda' (more images at the link) entered this year for the first time in the Shed of the Year competition, a shepherd's hut converted into a prayer shed. It includes a sofa bed and woodburning stove. Named after St Hilda of Whitby (among whose nuns in the order at Sneaton Castle in Whitby is the Shedworking editor's cousin, factfans), here's what owner Rob Hilton says about it:

"As a church minister the Shepherding link seemed appropriate. Somewhere to retreat to, shelter and rest, also in some ways a monastic cell for prayer, mindfulness and stillness. Built almost entirely from recycled material, I learnt to weld to create the chassis, used old victorian wheels, and discovered farmer's suppliers as both friendly and very cheap for the material I did have to buy. Named after St Hilda of Whitby, a Seventh Century British Christian."

This garden office has been far out at sea all day
The daffodils crashing through darkness, the booming hydrangea
Winds stampeding the WiFi…
— Tom Chatfield (@TomChatfield) February 23, 2017

I am feeling a tad vulnerable in my garden office right now! There's way too much crashing going on out there for my liking! #stormdoris pic.twitter.com/QYzhTWWn2W

Can I claim tax relief for a garden office? 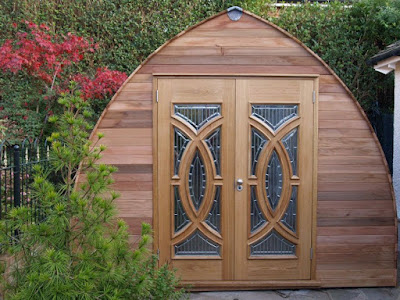 A useful short guide to this thorny subject is available at Northamptonshire-based KRW Accountants' website but in summary they argue that:
Well worth a browse.

Wednesday posts are sponsored by The Stable Company®, the UK's premier supplier of garden offices and garden rooms. Click here
Posted by Alex Johnson at 9:49 AM 0 comments

It's that time again. The annual Shed of the Year competition is now open for entries (closing date May 15) - you need to send in at least two images and a few words about your shedlike atmosphere and be a resident of the UK, although there is an International Shed of the Year title too. As in previous years, judges will pick a shortlist which is then voted for by the public for category winners and the over winner is finally selected by the judges. If your shed is already on the site and fulfils the above requirements it will be automatically entered into the 2017 competition.

Pictured below is the marvellous winner of last year's event, The West Wing. We particularly like the secret bookcase feature.

More details and the signing up form are here. 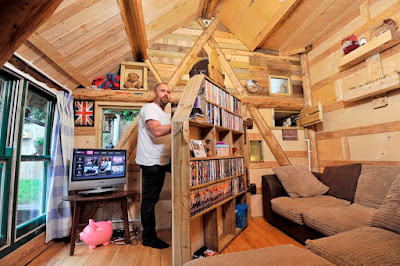 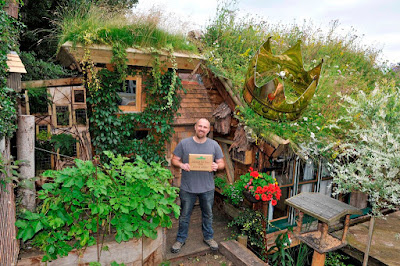 Tuesday posts are sponsored by Garden Spaces, suppliers of contemporary garden buildings, offices, gyms and studios, many of which do not require planning
Posted by Alex Johnson at 3:08 PM 0 comments

Where are they now: Tent 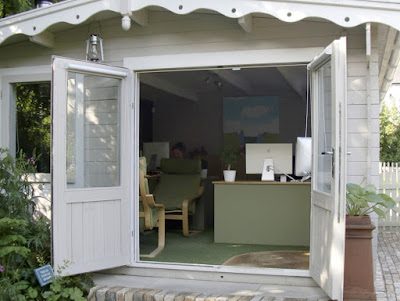 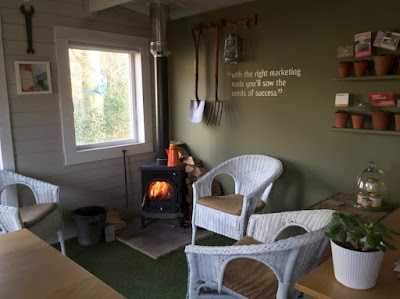 In the first of a new irregular series taking a look at the progress of successful shedworkers, we revisit Northumberland-based brand, design and marketing agency Tent who we featured six years ago when Dominic and Sarah first began working in their garden office. Here's what they say about the whole experience:


We’re lucky enough to own our own studio and even luckier that it’s at the bottom of our garden. We built the Shed in January 2011 (well when we say ‘we’ we mean a local team of highly skilled tradesmen!) and it’s proved to be the perfect space for us to be.

Totally on brand (of course!) the shed has quirky and fun features such as astroturf flooring and vintage potting shed paraphernelia. With lots of natural light, peace and quiet and nature all around, it’s a great space for us to work and also for our clients to visit, whether just for a catch up, a business brainstorm or a marketing session.

There’s always fresh coffee (or a selection of teas!) on the go, often the wood burner is cracking away in the corner and sometimes there are even homemade cookies.

Monday posts are sponsored by garden2office, the Swedish garden office specialists. Click here for more details.
Posted by Alex Johnson at 9:38 AM 0 comments 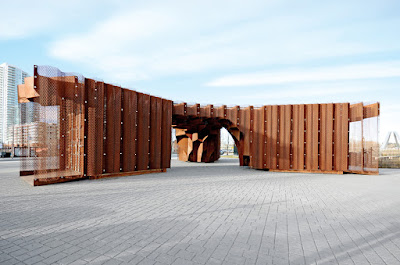 Every year the 'that's not a shed' cry can be heard on the interwebs when the Shed of the Year shortlistees are drawn up. So here's something to be going on with in the meantime which also falls neatly into our recent looks at shipping container sheds.

The Crossroads Garden Shed is part of a 49-acre development in Calgary with a community garden and around 100 raised planter beds. The shed which stores gardening tools and outdoor furniture designed by 5468796 Architecture which suggested the shed would make an ideal gathering space. It's made out of three shipping containers, Cor-Ten steel sheets in hexagonal shapes, and rusted metal mesh which fit together to give it a pavilion vibe.

How to heat your garden office

Swapping the ice-cold commute for the garden office just got better. Thanks @DimplexUK for creating personal desk heaters! #FreelanceLife 😍 pic.twitter.com/ZOyLUiuNrK

Tuesday posts are sponsored by Garden Spaces, suppliers of contemporary garden buildings, offices, gyms and studios, many of which do not require planning
Posted by Alex Johnson at 9:44 AM 1 comments 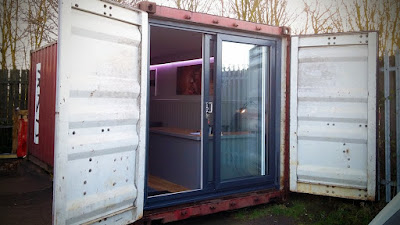 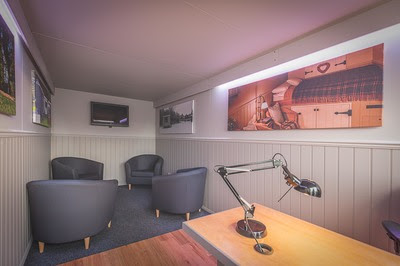 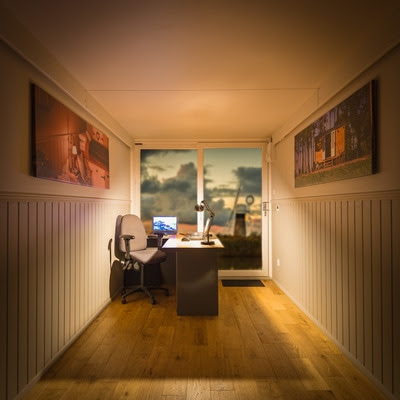 East Anglia-based Timberpad design and build bespoke timber buildings and shipping container conversions - all their buildings are bespoke, there is no basic range. Following last week's theme, we're concentrating here on their shipping container office which as they say "looks right at home in any industrial setting until you open the container doors and see the contrast of the clean, contemporary interior".

The return of the shipping container garden office - Part 1


Using shipping containers as garden offices was very popular a few years ago and it seems to be on the way back into favour (see here for a recent example in York). An interesting article on the BBC site by Simon Fry - Boxing clever: The firms based in shipping containers - which concentrates largely on the 50 containers that make up Pop Brixton and Boxpark, both in London. Here's a snippet


Each offers start-up businesses a more affordable way to get a roof over their heads, and the opportunity to rub shoulders with other like-minded firms... In 2015, 2.48 million standard-size 40ft (12m) shipping containers arrived in the UK, but only 2.41 million left again, according to official figures from the Department for Transport. The ones that stay are typically retired from service due to wear and tear, and put up for sale. And if you fancy one as a large garden shed, you can pick one up for about £1,100.

Thursday posts are sponsored by Cabin Master: garden offices and studios to fit any size garden. Top quality contemporary or traditional buildings.
Posted by Alex Johnson at 10:54 AM 0 comments

How to crane in a beach hut 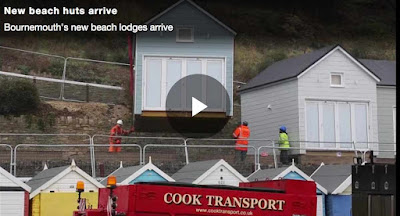 You can watch a fantastic video of how to crane a beach hut into a tricky position courtesy of the Bournemouth Echo here. It follows the installation of 15 new huts at Bosombe seafront. Each hut - which would make an evocative occasional shedworking space - can actually sleep six, and they all have hot showers, flushing lavatories and galley kitchens, as well as a living area and decking.
----------------------------------------------------