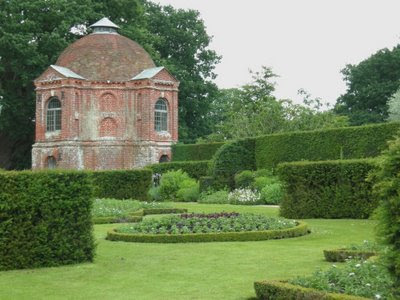 The Vyne estate and 16th century house in Hampshire run by the National Trust has a wonderful summerhouse dating from the early 17th century and thus possibly the earliest domed garden building in England. It was designed by John Webb and built in the shape of a Greek cross, probably as one of a pair planned for the garden, and used as a dovecote, banqueting house and even a 'lust' house (and hopefully an early garden office). Its first floor has now collapsed. I know how it feels.
Photo courtesy of Garden Hopping where you'll find a really nice pictorial tour of the gardens and other delights.
Posted by Alex Johnson at 12:26 PM