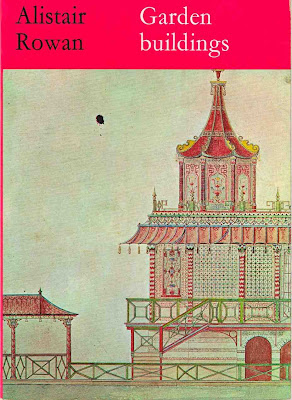 We've said goodbye to two regular slots this week - Thursday Outhouses and Beach Hut Tuesday - although we'll certainly feature examples of both again. So it's time for something new and every Friday we'll focus on books every shedworker should have in his garden office bookshelf. First out of the traps is Garden Buildings by the eminent architectural historian Professor Alistair Rowan, a slim but enjoyable 64-pager published by Country Life Books in 1968 as part of The RIBA Drawings Series.

There are no specifically shedworking structures or garden offices but the book features 44 garden buildings and designs from a very early 17th century Chelsea summerhouse by Robert Smythson to a Victorian municipal pavilion by Thomas Hill. Rowan also takes us on a whistlestop tour of the history of garden buildings arguing that while they were only really built as an attractive adornment to a garden, in fact they were used by architects as experimental models for larger projects and so were the prototypes for various architectural developments such as Gothic revival and Neo-Palladian. He ends the book by suggesting that the great era of garden building design is now over which, as we now happily know, is not the case, but this is a lovely little volume which is easy to find secondhand on the interweb for around £5.