Internationally famous installation artists Anna Heinrich & Leon Palmer are the clever folk behind this lovely shedlike camera obscura which they built at Rufford Abbey Country Park in Nottinghamshire this summer. Here they explain the whys and wherefores:

"The Rufford Abbey camera obscura is like a giant camera which has a very large lens as its window. Light from the scene outside travels through the lens and is focused onto a screen formed by the back wall of the Camera Obscura. The result is a huge inverted panoramic image of the park which has a very quiet and ethereal quality where time almost seems to slow down. 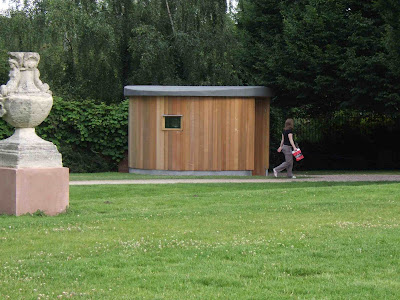 "The Camera Obscura is open to the public and is unsupervised so has been designed so anyone can go in and operate it. The door has sprung hinges so it closes on its own to reduce excessive light leakage from outside. Once inside the room it only takes a little time for your eyes to adjust as the lens is very large (at 250mm diameter it also acts as a small window) and produces a very bright image. The image has a central area of sharp focus that can be moved across the inverted panorama by pulling down on one side or the other of a steel rope that hangs beneath the lens window causing the lens to pivot along its vertical axis. 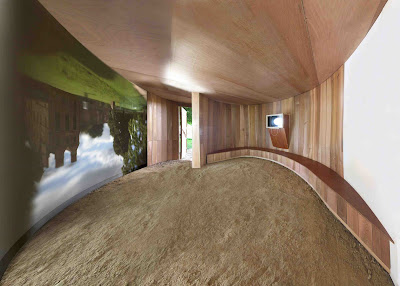 "The footprint of the building is an oval shape about 4m wide by 3m based on two radii relating to the focal length of the lens. The screen inside is 2.4m high. The Camera Obscura is clad inside and out with western red cedar while the entrance area is oak board. Inside a bench follows the curve the front wall so people can sit and watch the world go by in beautiful dreamy, upside-down cameraobscurascope. It is a wonderful space to be in, the colours are stunning and the smell of cedar fantastic."

Anna and Leon are keen to make more Cameras Obcurae (and other similar shedlike structures) so if anyone would like to commission one you can email them by
clicking here. 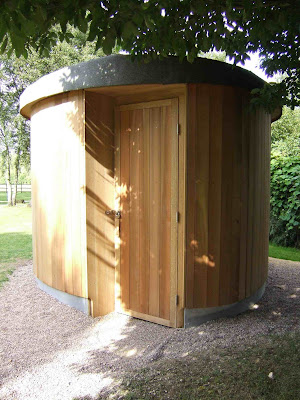 Tomorrow, I hope to bring you some photos of the construction process of the camera obscura.
Posted by Alex Johnson at 7:13 PM