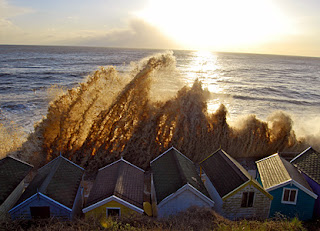 Southwold's famous beach huts have taken a battering in the storms in the UK over the last 24 hours (pictured above by Rachel Temple on the BBC site. According to the East Anglian Daily Times around a dozen huts - some of which can fetch around £100,000 despite the property slowdown - were severely damaged and some washed away. The huts were last hit badly by storms in 2003. Matthew Taylor in The Guardian said that as high tide hit, it became clear that the huts would bear the brunt of the storm. Beach huts at Cromer and Overstrand, further up the coast, were also destroyed.
Posted by Alex Johnson at 8:41 PM