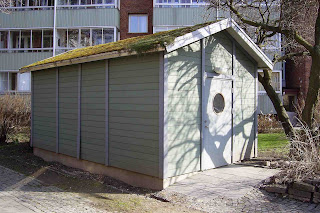 Sheds have a million and one uses, writes Shedworking's North Europe correspondent Sy Willmer. Needless to say everyone must have somewhere to put their rubbish and as the debate hots up surrounding the domestic chore of recycling home waste the good burghers of Malmö, Sweden, have taken the fight outside. We're all used to Scandinavian countries being some of the “greener” EU member states but consider the fact that most apartment buildings up north traditionally, and until recently, had a rubbish “shoot” found on each floor. So the transition from streamline convenience to taking all one’s rubbish down flights of stairs out into the snow has been quite a sacrifice. 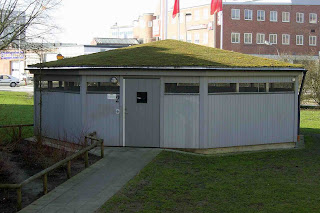 The Belgians get community tax incentives to encourage recycling but here Swedes receive improvements in the build environment. The example shown is constructed and finished with typically Nordic finesse. The building’s scale and material complement the surrounding low-rise urban block it services. This facility is with all the details you would want to see such as ramps, wide self opening doors, swipe card locks, vandalproof, plus with the inclusion of a “green roof”. Malmö is really is becoming Sedum Über Alles: as one of Scandinavia’s fastest expanding urban areas the city’s planners are committed to using green roof technology on the majority of flat roofs and low rise buildings and unlike a Nordic dish of dark Game meat and fruit jam, it looks good and you can sit on it. 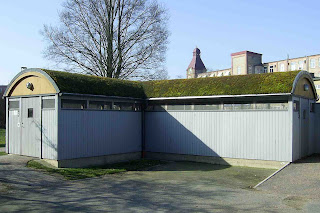 On the inside, larger models of “wheelie bins” or waste containers are parked side by side under illustrated information signs aiding the user to separate successfully. Waste collection services are then able to enter the shed for regular collection by means of a master key. The current norm when “doing the rubbish” at home in most of Europe is to just separate waste into recyclable material groups. In the future we will all have to go further and divide into categories, similar to what we do now with coloured glass but next will be types of plastic and metal. Several thousand kilometres south from here in Vienna they are already separating something like ten or more different types of individual material. I think that sheds may just save us – get your council to build you one today.
Posted by Alex Johnson at 10:03 AM