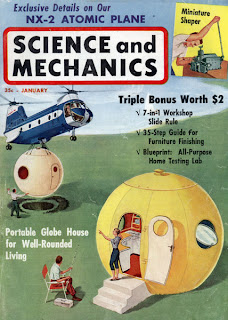 From Science and Mechanics via the excellent Modern Mechanix blog of January 1961, this is the future of shedworking, the Portable Globe House for Well-Rounded Living, called the Kugelhaus. As writer Wayne Wille says, it is just 15ft in diameter, very convenient, and can be delivered by helicopter. He continues:

"Its eggshell-like construction is of either lightweight reinforced concrete, metal or plastic. Just one inch of concrete gives good results, says the inventor, Dr. Johann Ludowici. The house can be completely assembled in the factory—with whatever furniture or other equipment is wanted—before delivery. As portable as a house could be, it can be flown to wherever you want it by helicopter, towed in by boat (it floats), or, more conventionally, carried on a truck."

Apparently, it was commissioned by the Belgian government which wanted a comfortable low-cost small house which could be towed up rivers or flown into remote regions of Africa for use as worker housing.
Via the always intriguing Shed and Shelter 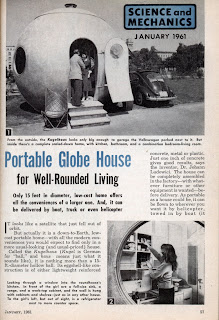