It is just you - virtual book tour (and win a book) 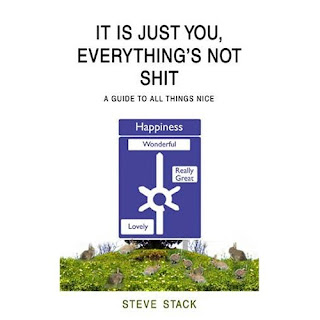 As part of his virtual book tour, Steve Stack and his marvellous book It Is Just You, Everything's Not Shit (an upbeat and witty riposte to those other books which wallow in the misery of things) appears today and over the weekend on Shedworking. In a rather postmodern take on the book tour (as if doing it online weren't enough), here is an interview Steve did with me about homeworking and shedworking, a longer version of which appears in his book. To win a copy, simply add a comment mentioning something nice about the world and the one I like most will get a copy of the book. Or if you can't wait, you can buy a copy here.

What are the advantages of homeworking?
Generally, a sense of freedom that you simply don't get in a normal office. I'd much rather be a box fresh, free range homeworker roaming free (or at least in a garden office) than cooped up in a pen, nose to nose with the same battery chicks all day. More specifically:
- A greater control over my time - I still have to work, but I can choose an extremely flexible routine which involves, for example, listening to cricket and playing with my sons which wouldn't otherwise be possible.
- I can listen to music (which is great since I've never worked with anybody who's shared my interest in early music)
- I choose how my office looks, can wear what I want to work, and have a 30 second commute (less if I decide to work on the kitchen table rather than go to the shed)

Tell us a little about Shedworking the blog, and The Shed magazine
The Shed is a free bimonthly pdf magazine for shedworkers and people who work in shedlike atmospheres, a lifestyle (sometimes quite aspirational) title rather than one which features nuts and bolts homeworking subjects such as filling in your tax return. I started it because there is a growing community of shedworkers (and homeworkers in general) whose daily experiences and interests are not catered for by any other publication, indeed who by definition tend to work in relative isolation and are not aware of others in a similar position. The Shedworking site is a natural extension of the 'brand', again made possible by new technology and its marvellously free nature. The idea of the blog is to provide a daily update of news and items of interest for homeworkers in general, but with a decidedly sheddish slant (e.g. the list of all the UK shed suppliers which is not available at any other central point). Unbelievably, nobody else does this on a daily basis for homeworkers anywhere in the world.

Shed envy - what's the best homeworking set-up you've seen?
Ooh, that's a very hard one. It might be a bit of a cheat of an answer, but I think you've got to go a long way to beat George Bernard Shaw's revolving hut at Shaw's Corner, just up the road at Ayot St Lawrence, which he could winch round to change the view or improve the light or maybe for a bit of exercise. It had a telephone connection to the house and electrics, and is still in good nick. One of the most admirable is Adam Constantine, a designer, who essentially runs a successful carbon-neutral company from his shed in Shrewsbury but in a modestly understated way.

How do you think working from home changes a person?
It deinstitutionalises them. It can also make them fatter if they can't keep away from the fridge (another advantage in working from a shed rather than a kitchen table).
Posted by Alex Johnson at 7:16 PM