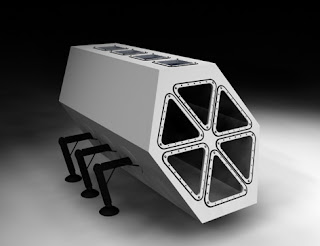 How would you like a shedlike atmosphere which walks? Those inventive folk at N55 have indeed been working on just such a prototype design in a project for the Wysing Arts Centre, Cambridgeshire. Inspired by gypsy caravans, the Walking House is a modular dwelling system which allows you to shedwork (or indeed live) nomadically with little environmental impact: energy is collected via solar cells and small windmills and a small greenhouse module can be added. And not only can it collect rainwater, it's amphibious. The framework is made of steel, aluminium or wood with windows of polycarbonate. 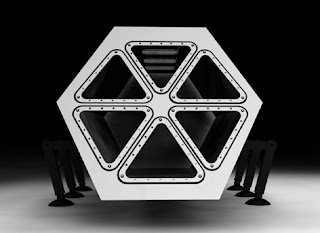 I'm not entirely sure about the next bit: there are six legs and they can be worked so that while it moves (slowly, at the pace of a human step), three legs are on the ground at the same time. The idea is a collaboration with a group of travellers in the Cambridge area. Here's what N55 say:

"The Walking House requires no permanent use of land and thereby challenges ownership of land and suggests that all land should be accessible for all persons. Society could administrate rights to use land for various forms of production of food for example, but ownership of land should be abolished.
N55 furthermore suggest that WALKING HOUSES should be owned by all persons in common and used by the persons wanting to live in them." 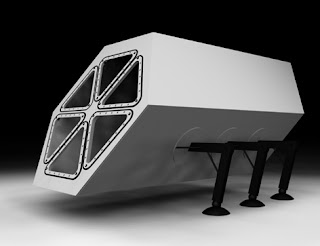