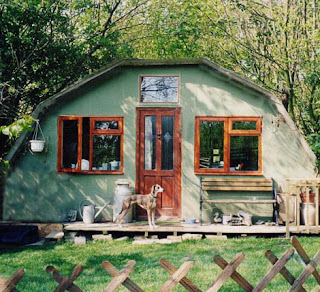 I had a lot of fun helping Uncle Wilco from readersheds.co.uk organise National Shed Week and an unexpected bonus has been that I've come across plenty of interesting shedworking atmospheres. Timegirl's Tardis was the overall runnerup in the competition but not only is she a champion shedowner, she's a sheddweller too, living in a restored Nissen hut (pictured) for which she has recently gained residential permission. Timegirl, a watch and clockmaker and restorer, told Shedworking in an exclusive interview:

"It was put up in the 1940s apparently and has also been a chicken house and a garage over the years, but it's been home since I slid off the property ladder - I doubt there are many detached homes in the south east with band A council tax! I've been busy repairing the roof of the hut for the last week, all that rain showed up a few more holes, so the building is covered in a 30' tarp at the moment - that's shed dwelling :-)

"It has an internal frame with wood cladding, still the curved shape, only 18' x 28'. The planning was retrospective although the hut was used as a dwelling in the 40s 50s and into the 60s. The planning department said they knew it had been a dwelling and said 'send in all the evidence you have', but 6 months later (after I'd moved in) they said they had no record of it. So I sat tight, bought blackout blinds, and then applied for lawful use and development under the four-year-rule. There were no restrictions when I got the planning, so the hut could be replaced with a house - and I expect friends to ask why we don't do that, but when they see the hut they always love it. And when I need more space I just build more sheds :-)"