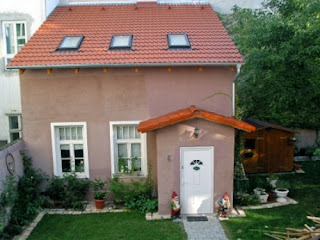 Sylvia Petter is an Australian writer living in Austria (her web site is here and her blog is here). And she is a keen shedworker, although she calls her rather monumental garden office a 'souk'. "I don’t know if my souk counts as a shed," she writes, "but it used to be a stable back in the early 1900s. When we came to see the house we eventually bought three years ago in Vienna, I didn’t have high hopes for the “outhouse” that was mentioned in the ad. But when I saw the little pink house across a cemented courtyard, I just knew this was to be my souk. In fact, it was that little house in the back that clinched the deal, which came with huge garden gnomes that now stand at the door, one even has a book in his hands.

"We had the cement courtyard taken out and I started a garden that is now starting to come along. The previous owner had started renovating my souk – putting in electricity and water, and new windows. But the little house had no real foundation so we’ve had all the electrical work put up higher. I’m about to be tiling up to the windows so that it stays dry. We had a new roof put on since before there was only a way for a chook to clamber up. And so we had a stairway put in and upstairs I have a place to relax from my writing mess and can sit back and read. Downstairs, next to my office there is a loo and a washbasin now. I call it my souk, because it’s always in a mess, but there’s a certain organic disorder that I thrive on." 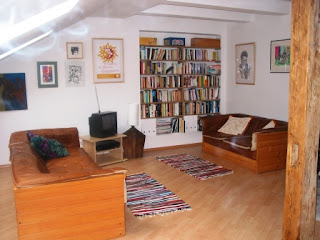 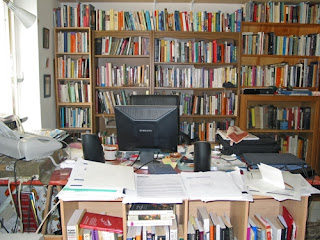