Shed of the Year winner announced

Is it a Tardis? Is it a DIY garden office? Is it a mock Roman Temple?

Shedowners around the world have been on tenterhooks this week as the
final round of judging for the jewel in the shed of National Shed Week
- the Shed of the Year competition - has come to a triumphant
conclusion.

There was a huge public response to the competition with more than
4,000 votes for over 700 entries in 16 categories, the winners in each
category going forward to the grand final.

The winner was chosen by a panel of judges that including television
property guru, "shed champion" and sheddie's favourite Sarah Beeny.
"Shed of the Year is a great excuse to wallow in the gorgeousness of
all our sheds," said Sarah, "and aren't they all fine!"

Sarah is also one of the hot favourites to top our public poll: 'Who
would you like to show around your shed?' Results of this online vote
will be announced on Thursday 5th July.

And now for the news you have all been waiting for: The Winner of Shed
of the Year 2007 is 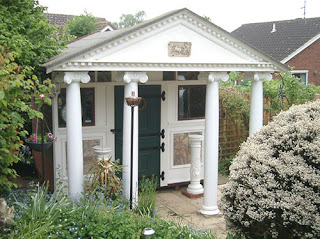 You can also click here to hear the official video announcement from Uncle Wilco and see a collection of photos of the shed by clicking here.

Tony describes his shed: "The Roman Temple is a Folly. All the best
stately homes can look across their estate and see a temple in the
distance. It's just that this one is a bit nearer to the house, that's
all!"

"Tony has done what most sheddies would love to do, turn their normal
garden shed into a unique building that's not afraid to stand out from
the usual shed crowd," says Uncle Wilco, head sheddie of
readersheds.co.uk

Organised by Uncle Wilco from the world-famous www.readersheds.co.uk
web site, with help from me, the first National Shed Week has been a major success with features in a range of titles including Wales on Sunday, Weekly News, Pink News, Glasgow Evening Times, The Daily Telegraph, Enterprise Nation, and The Gardening Website.

The BBC has got right behind National Shed Week with a major piece on
Radio 4's Women's Hour and backing from Chris Evans on his Radio 2
show, as well as impressive regional coverage around the country.

National Shed Week also received plenty of international coverage,
especially online, from sites such as green lifestyle specialists
Treehugger.com as well as the Belleville News newspaper in Illinois
where a local resident entered her shed in the competition.

National Shed Week has been sponsored this year by Taylors Garden
Buildings (provider of the First Prize - a new shed), Walton's Garden
Buildings, Teacher's Whisky, The Cheese Shed and The Shed magazine.
Posted by Alex Johnson at 9:58 AM