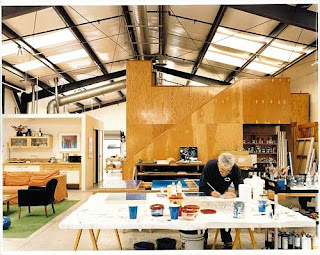 There's a nice piece by Michael Webb about shedworking in the LA Times in which he talks to four artists about their shed space. Metal features highly and they all sound intriguing. Pictured is Peter Alexander at work in his shedlike atmosphere and here's what Webb writes about it:

"He describes his prefabricated studio as "a very straightforward box with a pair of skylights in each bay. I wanted light that made me feel good and, by a fluke, it worked." He added roll-up garage doors at both ends to open the interior to the outdoors as well as to facilitate loading materials and artwork. "They were also inspired by memories of listening to 'The Green Hornet' and his faithful companion, Kato, on Saturday mornings," he admits. "Those programs always started with the sound of a door opening." Within, his office area is separated from the workspace by a free-standing structure of boldly grained plywood, containing storage and a sleeping gallery. "I've never been happier in a space than I have in this—I feel it every morning when I walk in," says Alexander."

Also featured are Francesca Gabbiani, Roger Herman and Joe Goode. The piece is well worth a browse.
Posted by Alex Johnson at 7:30 PM