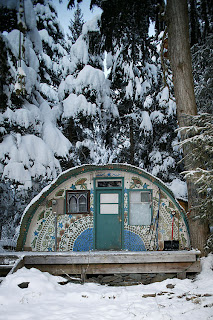 Quonset huts were the brainchild of the US military and used for vital warwork in the second world war. They were prefab, light, easily transported, easily put up, and built of corrugated metal. During and after the war, hundreds of thousands were built and then adapted for housing. Over the decades, many have gone the way of all flesh, but happily there are plenty in rude health and have become something of an architectural icon, living on as housing, shop space or just good old shedworking atmospheres. There's a fantastic web site devoted to Quonset Huts, Quonset: Metal Living for a Modern Age where you'll find details of a book about them and a recent exhibition, plus plenty of photos and other delights. Well worth a browse.
Posted by Alex Johnson at 8:02 PM