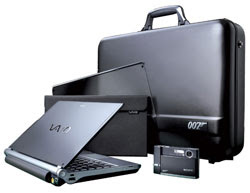 Homeworkers are not well represented on the big screen. Writers are usually neurotic (see Woody Allen in Manhattan), inventors are eccentric (Michael Redgrave as Barnes Wallis in Dambusters) and computer experts are socially inept (Sandra Bullock in The Net, who spends so much time in her home office that only her mother knows what she looks like). However, after watching Casino Royale earlier this week, I’m wondering if Daniel Craig’s James Bond could start a new Hollywood trend. Previous Bonds have had plenty of gadgets but have used them largely as big boy toys: Craig’s Bond uses his gadgets to work.

Bond has never been deskbound in a traditional office, but now he’s become the role model for those operating a virtual office: he’s put the B in going Bedouin. So forget about exploding pens or ejector seats, now Bond never travels without his Sony Vaio laptop (though working wirelessly in a Venetian gondola is perhaps more glamorous than most of us can expect), keeps an impressive first aid kit handy (like me, in his Aston Martin DBS), and uses his Sony Ericsson mobile phone with built in GPS for text messaging.

And like many homeworkers, his employers are keen to keep track of his movements when he is out of the main office, although injecting him with a trackable microchip is perhaps a step too far.

Never one to miss a trick, Sony have bundled all this stuff, including a screen privacy filter, into one delightful Spy Gear Bundle package which you can buy from their site here.
Posted by Alex Johnson at 9:24 AM