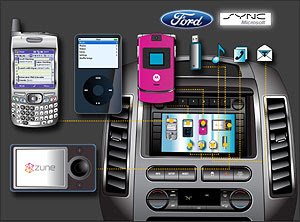 The concept of a mobile office is a key one to most homeworkers, especially in America where a recent study by The Dieringer Research Group revealed that 21 million Americans work in their cars. If you want to pay through the nose you could go to a specialist like Becker Auto Design who provide luxury limos with an on-board PC, wireless keyboard, color printer, wireless high-speed Internet connection, and up to 30-inch LCD monitor. But sadly not all of us have £150,000 going spare. 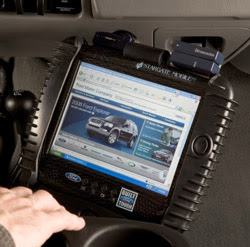 Two years ago Ford unveiled a newcomer to their F-Series of pickup trucks, the F-250 Super Duty which contained a GPS, wireless broadband, printer and digital camera-equipped mobile computer, pictured, within easy reach of the driver and powered by the truck’s battery (or it can be removed and used as a normal laptop). But now we’re getting closer to a genuine office on wheels for the general driver with Ford’s new Sync system , pictured, premiered earlier this month at the 2007 North American International Auto Show and developed in collaboration with Microsoft.

The blurb describes it as “a fully integrated, voice-activated in-car communications and entertainment system for mobile phones and digital music players” and it will be available in 12 species of Ford later this year. What this means is that you can use your mobile phone (and mp3 player) via voice commands and indeed your mobile’s names and numbers will be wirelessly transferred to the vehicle. And Sync also ‘talks’ French and Spanish as well as English (if you want to give your languages a workout). More details from Ford here .

And Ford have also recently previewed their, frankly not very pretty, Airstream travel trailer which includes a dual-view screen on the instrument panel which allows the front-seat passenger to view DVDs and post mobile blogs.

Of course, you can try do it yourself. Have a look at how PC Magazine modified a Toyota Corolla (including a shredder in the glover compartment) or in this article in the Daily Telegraph how Ben Tristem turned his motorhome into a complete mobile office with a home cinema screen for video conferencing with clients and satellite broadband.
Posted by Alex Johnson at 1:07 PM