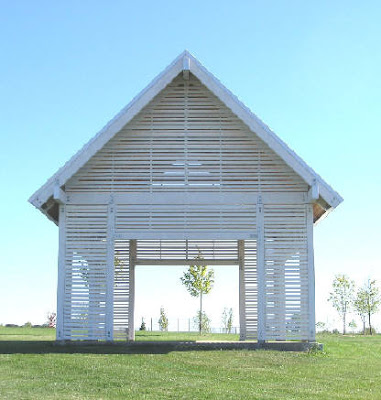 Another example of a shedworking atmosphere which would be a little chilly in winter, this park structure is part of the Stonemill Farms Phase II Development Park/Greenway Structures in Woodbury, Minnesota. It is built in a series of small parks connected by paths and greenways and architects Douglas Danks say it "sets a precedent for simple agrarian forms constructed of post and beam framing with a horizontal slat infill reminescent of wood corn cribs".
Nice spot from Bill Kratz.
Posted by Alex Johnson at 9:35 AM