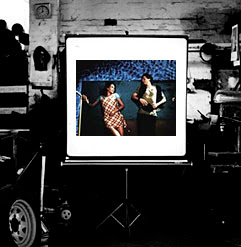 Shedworking reader Starskier suggested that we put together a list of the top 10 films featuring shedworking atmospheres. So here are our first five:
1. Notes From A Scandal (2006)
Pottery teacher Sheba Hart not only has an impressively-kitted out studio at her school, she also has a very nice shed at the bottom of her garden at home which is pleasantly bohemian without being too much. 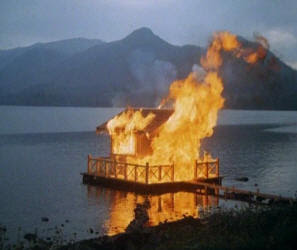 2. Mahler (1974)
Ken Russell's look at the great composer's life includes a dramatic scene when one of his composing huts (he had three) whooshes up in flames.
3. The Green Man (1956)
Alastair Sim's clockmaking terrorist has a shed workshop in his back garden from where he and his Scottish accomplice McKechnie plot the end of pompous MP Sir Gregory Upshott.4. Kind Hearts and Coronets (1949)
Alec Guiness's young Henry D'Ascoyne is keen on photography (and sherry) and enjoys them both in a shed in the grounds of his country estate - until Dennis Price's Louis turns the shed into a bomb...

5. Grow Your Own
A year in the life of the Blacktree Road alloments and its allotmenteers - including newcomers - features many fine sheds and a draconian rule that all sheds must be painted the same colour

We'll bring you the next five in the New Year, but if you have any suggestions, please do leave them as comments or email direct. The image at the top of this post is courtesy of The Shed at Hovingham, near York, a first class bijou venue for poetry and music which also puts on films and hands out free popcorn.
Posted by Alex Johnson at 9:24 AM