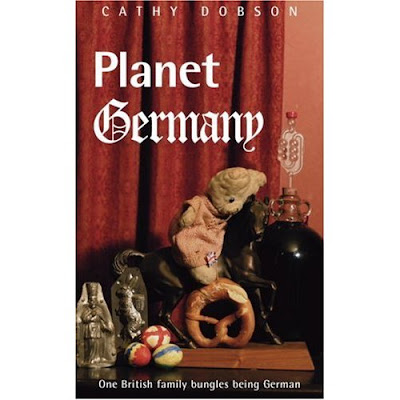 Shedworking reader Cathy Dobson from Red Door consulting in Germany is not only a shedworker, she's written a book about her experiences (not just of shedworking, but also of living and working in Germany). Planet Germany was written from her own shedlike atmosphere, a former pig-sty near Düsseldorf, now a lovely home office. Here's the Amazon blurb:

"After a decade of living in Germany, a chaotic British family makes a New Year's resolution to throw themselves wholeheartedly into the local culture. The process is complicated as the mother is founding a business with a German partner who is convinced that all Brits are both dysfunctional and poorly nourished. The year sees them bumbling through local festivals, getting into scrapes with authorities, and falling foul of the law, all aided and abetted by their eccentric neighbours and posse of cats. This book exposes the crazier side of both British and German culture, examines profound mysteries such as German fortune telling and sauna etiquette, and explains why dachshund owners are the most dangerous people on the planet."

And here's an exclusive extract:

"While we adults eat and the children pick at the stuffing sullenly, the conversation turns to the new business Birgit and I are setting up. We are launching a management consultancy, based in the disused pigsty behind our house which we’ve converted into an office.

We’ve spent the last month preparing everything. The pigsty has had its leaking roof mended, a smart wooden floor has been laid, we’ve re-wired, re-plastered, painted and I’ve even attached a shiny brass door knocker to the gleaming red door. In the run-up to Christmas, we’ve set up our website, installed desks, a server, lap-tops, fax machine, printer. We’re ready to launch.

“It’ll be great fun working from home,” I hazard. “I never used to see much of the children when we were in an office in central Düsseldorf and I always got home so late.”

Birgit looks at me quizzically. I can tell that seeing lots of someone else’s offspring isn’t her idea of a great working environment.

“When we’re at work, you kids will have to avoid playing directly outside the office,” Birgit tells them. “We can’t have our phone calls interrupted by the noise of a dysfunctional English family in the background.”

“I don’t mean there’s something wrong with your family,” Birgit reassures me. “The English nation per se is dysfunctional. Don’t take it so personally.”

You can buy it here.
Posted by Alex Johnson at 7:11 PM