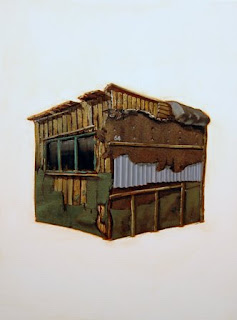 Sheds are symbolic of so much that is good about life. That's certainly what artist Julian Perry believes. His show A Common Treasury which opens today features paintings inspired by an area of allotments which will be destroyed to make way for London’s 2012 Olympics. Here's what the press release says:

"Perry sees the sheds built from recycled materials as idealistic, representing the city dweller’s retreat into a less complicated life based around the seasons. The structures are seen as utopian sculptures (in decline), manifesting a creativity born out of the most basic desires for shelter and food.

"He points out how poignant it is that this precious enclave of cultivation and wildlife is being wiped off the face of the earth at exactly the time when the predicted climate change has become reality. A powerful expression of how much we
have to change if there is to be any chance of reversing the environmental damage of the industrial era”.

Pictured above is Shed 54, Oil on panel, 152 x 244 cm. An illustrated catalogue is available. More details about the show at Austin Desmond and a nice piece in The Times by Grayson Perry.