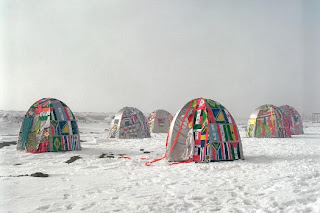 Antarctic Village - No Borders was an 'ephemeral installation' set up in Antarctica earlier this year by Lucy and Jorge Orta of Studio Orta. They put up 50 domed tentlike dwellings (handsewn using flags, clothes, prints, etc) to draw attention to the problems of how we regard and treat borders. Here's how they describe it:

"Antarctic Village is a symbol of the plight of those struggling to transverse borders and to gain the freedom of movement necessary to escape political and social conflict. Dotted along the ice, the tents formed a settlement reminiscent of the images of refugee camps we see so often reported about on our television screens and newspapers."

The site has lots more detail about this interesting project and, at the risk of trivialising Studio Orta's efforts, lots of very atmospheric images. 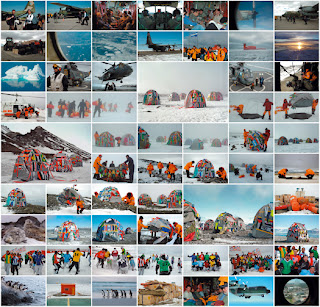 Via Been/Seen
Posted by Alex Johnson at 8:12 PM