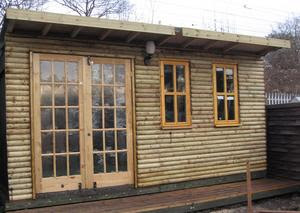 There are very few detailed accounts of selfbuild garden offices on the interweb - one of the best is Kevin Boone's Kev's Kabin. "I'm not writing this to explain the best way to build a large timber garden building," he writes. "After all, I'd never built one before either. Rather, I'm hoping that other people will be able to learn from my mistakes, which were prolific." Kevin is being modest - as his account shows, he's really rather nifty and has put together an impressive shedworking atmosphere, pictured above. I particularly like his 'What I Learned' section (which includes the mantra 'It takes much longer than you might think'). He reckons that by building it himself he has saved £10,000.
Posted by Alex Johnson at 9:15 AM