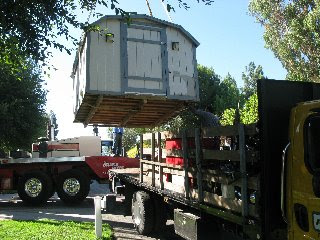 Not only has Mr Dogg spent some considerable time in his garden shed since the turn of the century playing Madden and watching television, he has also written some of his hit 'rap' popular music hits in it. And now he is selling it for charity. Bids start on ebay from $1,000. Snoop has also signed the shed, pictured above.
Via Shedblog
Posted by Alex Johnson at 12:20 PM