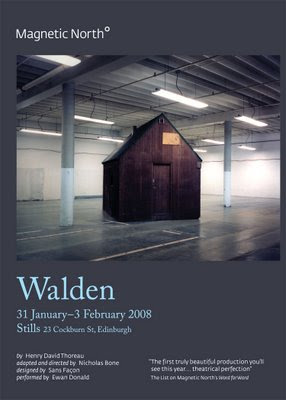 Walden, the play of the book, has been running over the weekend at the Stills in Edinburgh as we reported last month. Our theatre critic, Helen Fowler who runs the Mother At Large site, sent in this exclusive review for Shedworking.

"Henry David Thoreau’s book Walden is a classic of American literature that explores man’s relationship to his surroundings – via Thoreau’s personal retreat to a hut in the woods. An account of how Thoreau, disillusioned by his ‘modern’ life of commerce, railroads and telegrams, flees for the woods, it remains a set text for many American students to this day. “I did not wish to live what was not life,” says the character of Thoreau in this one-man dramatisation of the book by Magnetic North. “My life was being frittered away by detail.” And so, seeking solitude and simplicity, Thoreau leaves civilisation and takes himself into the wilderness near Concorde, Massachussetts , where he builds himself a hut using wood from nearby trees. His aim, he tells us, is “to live deliberately”. The hut measured just 10 feet by 15 feet, yet Thoreau says it allowed him to explore “a thousand regions in the mind as yet undiscovered”.

Thoreau’s experiment in solitary living lasted just over two years. But his legacy has proved enduring. This dramatisation of his time in the hut, which takes its name from nearby Walden Pond, makes for an entertaining hour of theatre, in which Thoreau (played by Ewan Donald) maps out for the audience his world, his furniture (much of which he made himself) and surrounding nature. He also took some books – “the treasured wealth of the world” – with him on his adventure.

The only props in the show, staged in the round, are a heap of sand and a wooden stick. Yet the show, on at the Stills photography gallery in Edinburgh, succeeds in evoking how Thoreau’s hut might have felt like in 1845 when he built it. When Thoreau hoes his rows of beans, we feel his pride in them. When he marvels at the birds of prey circling high above him, we sense their presence. Walden is a thoughtful and uplifting piece of theatre – essential viewing for anyone with an interest in huts and the relationship their inhabitants have with their environment."

For more details go to Magnetic North's site and their blog where you'll find production photos by David Grinly including this one below. Look out too for Helen Fowler's new book of the blog Fashionably Late which will be published by the smart folk at The Friday Project in 2009. 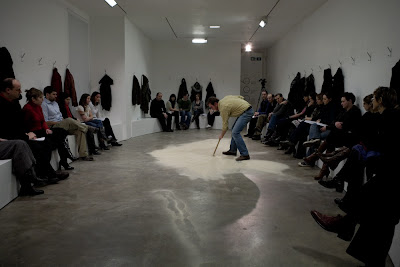