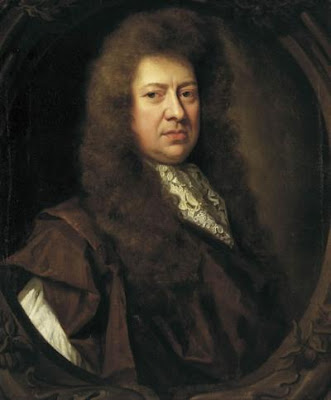 Pepys may not have actually had a garden office, but according to Martin Shankleman writing on the BBC web site, the famous diarist was a prototype homeworker. He reports that architect and academic Frank Duffy, who has analysed Pepys' work patterns as a naval administrator, describes them to be remarkably similar to a modern teleworker. "Pepys was a very mobile person indeed," Duffy is quoted as saying, "in terms of the geographical freedom in which he operated in London". The site has some lovely extracts illustrating his working days including this:

"26 September 1660: Spends morning in office with Surveyor and Comptroller of Navy. Drinks a "cupp of Tee" for first time. Takes barge to Deptford dockyard to pay for ship. "At the Globe we had a very good dinner." Back by barge to City. Coach to Westminster to inquire on his Lord's health. Home by coach."

Thanks to Uncle Wilco for the alert.
Posted by Alex Johnson at 12:30 PM