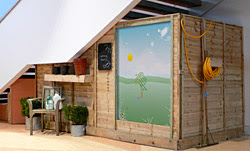 The Eden Project in Cornwall is not only a fascinating place to visit, it also loves sheds. As Uncle Wilco points out at Shedblog, among their recent exhibits was the Water Shed (pictured), designed to celebrate World Water Day on 22 March 2006 by Digit in association with WaterAid. This is how Wateraid describe it:

"On the outside the installation looks like a traditional garden shed and houses familiar objects such as a watering can, hosepipe and bucket. Visitors are drawn in to interact with the digital landscape wrapped around the interior, as users interact with the bare landscape by 'watering' the various elements, the environment on screen evolves and flourishes. Vines start to wrap around the shed frame while trees grow and start to spell messages as they are fed. When the watering ceases, the foliage shrivels back to its neutral state. By aiming the hose or the watering can at the sky, the clouds part to reveal water-related messages."

But they also have other shedworking structures, designed by shedworking engineer and cartoonist Tim Hunkin who says:

"A shed is wonderfully practical. It insulates sound and keeps out daylight so each shed can be a completely different world inside. Sheds are also very cheap and easy to prefabricate, so exhibits can be completely finished and tested off site. Their only drawback is the need to cover them in intumescent fireproof paint - horrible gloopy stuff which ruins any surface. Among his works for the project is the Edeon Cinema (pictured) with plywood seats which catered for audiences of up to 11 people with the video projector on a shelf above the entrance door. 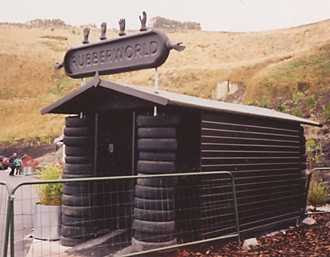 "Rubber is a good good subject. It combines stuff about plants (that Eden like) with stuff about the history of technology (that I like) and a touch of vulgarity (rubber fetishism and condoms). We found enough images and objects to completely stuff the 8 by 12 shed, giving it the appearance of a Victorian style museum. We received an enormous amount of help from the Malaysian Rubber Development association, who had a brilliant photo library and provided many great rubber objects and lumps of raw rubber. Rubberworld has since been re-erected outside near the biomes. The sign is a sheet of rubber, in front of the lettering cut into a wooden sheet connected to a vacuum pump. As the pump sucks, the lettering is revealed and the gloves round the edge inflate with the air sucked out of the letters."

The Eden Project also has less spectacular but nonetheless attractive sheds too. 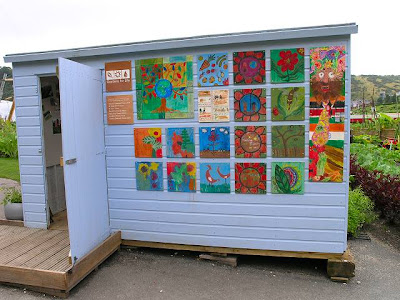