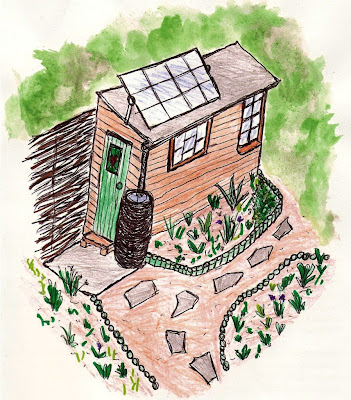 While the market for off the peg garden offices seems as strong as ever, lots of people have been contacting Shedworking recently with details of their plans to self-build their garden office (such as One Grand Designs), a task for which I have nothing but admiration since I would never attempt this myself. The latest I've seen is Humble Designs which describes itself as:

"A celebration of DIY reskilliing, handbuilt shelters, low impact structures, shed architecture and tiny houses, and a riposte to the disempowering idea that self-build projects need to be expensive or 'Grand'!"

Run by permaculture expert Graham Burnett, pictured above is his first design sketch for his new garden office. The design highlights another strong trend towards ecofriendliness - it features recycled windows, a rainwater harvesting system, photovoltaic panel to power a laptop, and waterbutt to feed the small garden pond.

Unsurprisingly, Graham - who works with adults with learning disabilities as well as running his small self-publishing and permaculture teaching and design business Spiralseed - was taken by the GardenARK project featured earlier today which he saw at this year's Grand Designs Live show, but it has actually inspired him to have a go himself. Read more at his site which also has a nice account of why he has decided to become a shedworker. This is a site we'll be watching closely as his vision develops.

Thanks to Martin Doyle for the alert
Posted by Alex Johnson at 10:58 AM