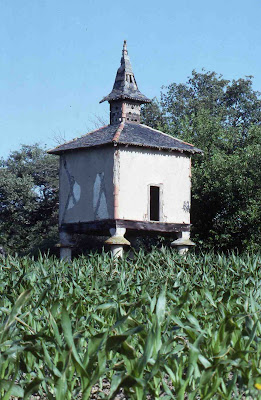 One attraction of buying an old property in rural France is that you usually get space to spare, writes Shedworking's French correspondent Nick Inman. You don’t need to think of buying or building a shed in the garden when you have convertible outbuildings in your grounds to spare. You may get a barn or two included in the purchase price, or a chicken coop or pig sty; but if you’re lucky your house will come with a pigeonnier, a quaint free-standing dovecote ripe for office development.

There are pigeonniers all over France but they are concentrated in the southwest. In the north (and in Britain) where a cold climate meant winter food was often in short supply, keeping pigeons was a feudal privilege and a dovecot an ostentatious sign of privilege. In the poorer, warmer south where the human population was thinly spread any smallholder could drill a few large holes in a wall to let the birds in to roost. In times before cars and supermarkets, life in the country meant self-sufficiency or starvation. Pigeons were easy to keep: they bred quickly, producing an endless supply of eggs and meat for the table and droppings which could be used as fertilizer for the fields and vineyards.

From the 16th century on, landowners with surplus cash delighted in commissioning round or square towers with elegantly pointed roofs a short way from the house, perhaps stranded in a field of sunflowers. These were still functional structures but they had now become follies.Now that farming is mechanised, fertilizer comes in sacks marked up with health warnings and life in the countryside more bourgeois-bucolic than a slog, property owners are putting their pigeonniers to new uses. Even though they were built for birds, most pigeonniers are large enough to make a decent-sized room out of. They usually stand on stilts capped with mushroom shaped stones to protect the pigeons from rodent predators and a flight or steps or a ladder is needed to get inside but that only adds to the sense or intimacy. What they don’t have are windows and you have to be ingenious to get around this limitation if you want to keep the harmony of the architecture.

But with the aid of a grant for the preservation of a local rural building, there’s not much else to stop you turning the cute little stone or half-timbered tower in your grounds into a home office. Just remember to block up the access holes in the roof or you’ll be forever cleaning pigeon muck off your keyboard.

A version of this article appears in the latest issue of The Shed magazine.
Posted by Alex Johnson at 11:19 AM