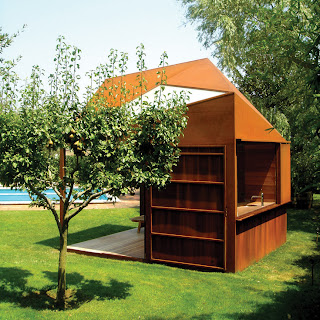 Not technically a place in which to shedwork but still lovely is this garden hut by Eightyseven at Sant Miquel de Cruilles in Spain. It was a winner in the 2004 ar awards for emerging architecture. This is how the judges described it:

"The client considers his garden as an open-air room of the house, so, from the first, the little place was thought of as a large piece of furniture, and created with much attention to detail. In winter, it acts as a compact storage shed, in summer it folds open to become a gazebo."

Essentially, it's a square box with rusty steel walls and two triangular skylights. The walls slide back when it's hot.