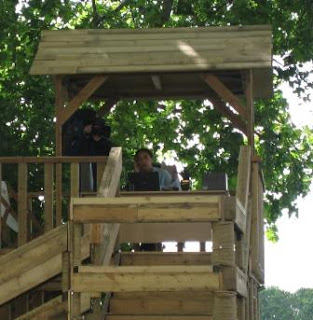 In another of the many polls about homeworking, Microsoft recently revealed unsurprisingly that more than 90 per cent of workers want to skiddadle out of the 'traditional' office environment and work from home, preferably in an outdoor location. In brief, their research as part of their Mobile Out Of Office initiative (MOOF) suggested that 14 per cent of Brits believed the ideal place to work would be the beach (ha, ha) and 10 per cent said they would prefer to work from their park or garden (which, reading between the lines, obviously means shedworking). But instead of just announcing the results, Microsoft did something rather interesting - they set up a tree office in London's Pimlico Gardens (pictured). 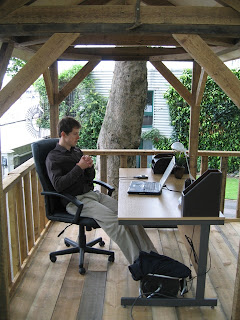 At the MOOF blog Mr Moof wrote: "So, here I am and I have to say, despite the slightly breezy weather and the threat of rain, I’m enjoying the fresh air and the liberation and finding myself curiously motivated to work!"

James McCarthy from Microsoft Windows Mobile said: "The tree-office shows businesses that it is possible for workers to be free from their desks and still be able to work, and employees that their dreams of working outdoors can be realised. In fact, mobile working is all about being liberated, having more control over your day and at last more freedom in your life." Sadly it's not a permanent move and they've now dismantled the treehouse and donated it to a school. But it's certainly a step in the right direction.
Posted by Alex Johnson at 10:12 AM