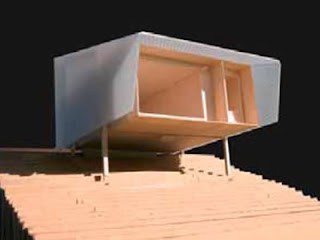 The concept of the ideal primitive hut has been an interest of architects since Vitruvius and at the Art Center College of Design in Pasadena, Sean Godsell and his design team have come up with a 21st century version for their Open House: Architecture and Technology for Intelligent Living exhibition which looks at sustainable houses of the future. Godsell describes his work (pictured) which measures 6.6m by 6.6m, as a

"shack which combines the essential humanity of Gottfried Semper’s Die vier Elemente der Baukunst (earth, the hearth, framework/roof structure and lightweight enclosing membrane) with the expediency of digital technology...the core idea of Primitive Hut is to create a house that enables escape from a contemporary working life often brim full of technology and stress. The remoteness of the shack affords a re-connection of body and soul."

The construction is interesting and Godsell says the building's exterior has been constructed to resemble human skin, made up of tubular cells which can control shade, light, heat loss, conversion of solar energy into electricity/hot water, and the filtration of dust/pollutants. There is also a mechanism for reusing rainwater via underground tanks. The idea is that the building can respond automatically to climate change and be programmable by its human users. He concludes: "Combining digital technology with sound, sustainable design and integrating it into the building facade results in an environmentally intelligent building—but one that looks good."

The show runs until July 1 and if you're not passing through Pasadena, you can get a lot more details from their site here.
Posted by Alex Johnson at 10:59 AM