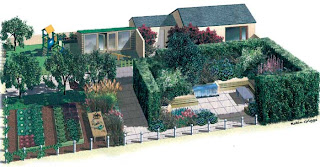 The Hampton Court Palace Flower Show is on from July 3 to July 8, but it doesn't look like it will be a classic year for garden offices this time round. One that does stand out is the Centrepoint garden (Designer: Claire Whitehouse, Contractor: The English Garden Company), pictured. As well as being highly worthy, catering for socially excluded homeless youngsters, there is a shedlike building at the back of the garden which is both an information and chillout area. No pictures yet, but Jacqui Prout's Try This At Home garden says it will feature "a shed and workspace for dad" which sounds promising. Tatton Park's show, July 18-22, is even more lacking in garden offices though I like the look of Forest Fusion, designed by Phillippa Probert and sponsored by, among others, Bartholomew Contemporary, whose clever glass studios we've featured previously on this site. The garden is an urban forest which claims to be ideal for work because of its seclusion. In the centre is a glass pod with smart glass technology which changes its tint to control heat and light to make an interestingly shedlike atmosphere. 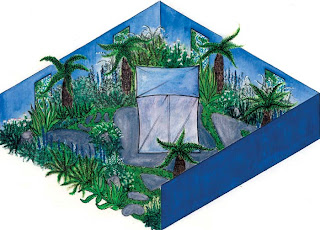