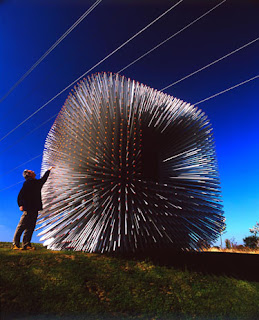 If you thought you'd seen pretty much everything in terms of shedlike atmospheres, think again. Pictured is the Sitooterie II (apparently from the Scottish, a small building in which you can 'sit oot') commissioned by the National Malus (crab-apple) Collection and put together by the clever folk at Heatherwick Studio. It's a 2.4m cube with more than 5,000 long thin windows - 18mm square-section aluminium tubes glazed with transparent orange acrylic - all over its surface, built from 15mm anodised aluminium. I found this on the intriguing been-seen site which has a marvellous section called Go Cabin.
Posted by Alex Johnson at 2:33 PM