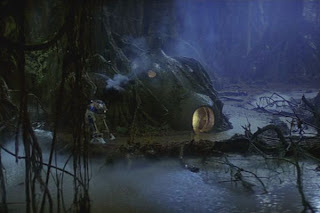 We start a new occasional series today looking at fictional sheds with Yoda's hut from Star Wars. According to the marvellously-titled Wookieepedia where you can find a huge amount of extra detail:

"Yoda's hut was a dwelling made by Yoda during his self-imposed exile on Dagobah. The hut was simple, constructed of mud, but utilized his escape pod energy source. Despite this, Yoda had to draw upon the Force at all times just to hold it together. Yoda salvaged most of the parts from his escape pod to build this hut. He utilized deck grating for a solid foundation, illumination panels for lighting, and thrust nozzles for shaping his windows and doorway. He then packed mud from around the area to form the outer "shell" of his home. Then, the only matter that remained to be built was the interior."

Apparently, the first blueprint of the hut was more like a mosque with stained glass windows. This hut was built inside a tree, and after Yoda died it almost disintegrated without his Force to hold it together (not unlike some other sheds I know).
Posted by Alex Johnson at 8:45 AM