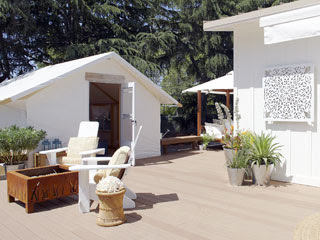 Hertfordshire-based garden office supplier Vivid Green has expanded its garden office line to include canvas lodges and treehouses. Vivid Green's Neil Johnston comments that in the US there is a long tradition of 'wall, wood frame and platform' tents, many of which are still in use in the National Parks such as Yosemite. Now available in the UK will be similar canvas lodges designed by Sweetwater Bungalows: the wood frame provides stability, the fabric walls considerable lightness and cosiness. Vivid Green has also teamed up with treehouse specialists William Skinner.
Posted by Alex Johnson at 9:44 AM