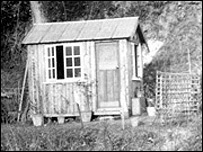 Clarence Hamilton Creasey - gardener, writer, friend of HG Wells and shedliver for several years - is to be celebrated in an exhibition at the Sir Henry Jones Museum in Llangernyw, Conwy, which runs from August 4 until the end of September. More details at the BBC site here and here. According to the BBC:

"As his retirement approached he seems to have had some sort of mid-life crisis and decided to turn his family's life upside-down. In 1929 he moved to Llangernyw to create the garden of his dreams on the side of an abandoned slate quarry. Its major asset was a magnificent waterfall reminiscent of one he must have seen in Bodnant. The river and waterfall were the focal point of what was to become a wonderful garden planted with rare and newly introduced plants. But this move came at some cost to his family as the land was rented and had no house. He solved this problem by building a shed (known as "the hut") in which he lived for a number of years while his wife Nell and youngest son Ron moved to St Asaph."

The wooden house still stands today, though is in need of renovation.
Posted by Alex Johnson at 9:14 PM