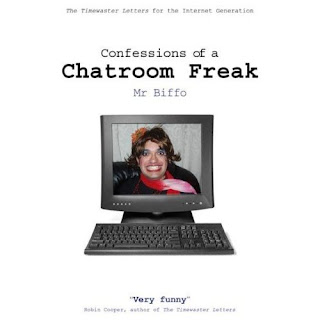 Shedworking is proud to be a part of the virtual book tour for Confessions of a Chatroom Freak by Mr Biffo (not, you'll probably have guessed, his real name). If you're old enough to remember the Henry Root letters or more recently The Timewaster Letters, then Confessions is a similar premise but cleverly updated to the 21st century for the internet generation. And rather ruder. Essentially, the book contains transcripts of genuine conversations between 'beautiful' chatroom addict LoopyLisa21f and various would-be suitors. For our section of the book tour, we asked LoopyLisa a few questions about sheds, garden offices and shedlike atmospheres...

- What does your garden office/shed look like?
I’m not sure what you mean, dear. It looks like a shed. You know: like a little wooden house, upon which my dad has roughly scrawled the word “SHED” – in fox dirt! Also, what is a garden office? Is that when people go outside to do work, “al fresno” style? I think that would be lovely. You could sniff the lawn while you filed your office stationary acquisition forms. However, when it rained it would probably interfere with the photocopier. Although I suppose if everyone was working outside you’d always have a robust “tarp” to hand with which to cover any electrical items in the event of rain, hail, snow, or “sleet”. Thinking about it, it’s probably a better idea to work indoors. I’m not sure even a robust “tarp” could protect from very intense “sleet”!

- Why do you like your garden office/shed so much?
To be honest with you, it’s really my dad’s shed. I’m not sure why he likes it so much, but he does spend a lot of time in there. One time, me and Craig followed him down there, and peered in the window. He was just standing there in the middle of the shed, huffing and puffing, and occasionally stamping his feet, laughing and tossing his head from side to side, and chattering at thin air. He doesn’t even have any tools in there – just a load of scorched segs he’s been looking after for a friend. He keeps them under a “tarp”!

- Who would you most like to show around your shed? And why?
I’d like to take Yorkie Peters on a tour of the shed. Do you know Yorkie Peters? He’s my favourite singer: “A song, a smile, and an organ”, that’s his motto. One time I saw him performing on the back of a flatbed truck as it hurtled out of control through the town of Cerne Abbas. Although I should point out that incident only ever happened in a dream. And it wasn’t even a dream that I’d had – it was a dream that was vividly related to me by my friend Craig. And it wasn’t even a dream he’d had! If I ever had the chance to show Yorkie around my shed I’d lay on a special tea for him; I’d serve him Yorkie bars, Yorkshire puddings, and other things from Yorkshire, if I was able to think of any. What a shame Yorkshire isn’t called “Porkshire”, because then I’d be able to serve him pork pies, pork chops, and other thinks made out of pork, if I was able to think of any.

- The German philosopher Martin Heidegger was very fond of his hut and it played a central part in his philosophical outlook - how has your shed influenced your own philosophy of life?
I have never heard of Martin Heidegger, or of the country from which he comes, but I do know what a hut is. I think the way in which sheds have most influenced me is in the way they have influenced most people: my parents locked me in one when I was a child, while they hammered against the windows, and forced an excessive amount of dough through the crack beneath the door.

- Are sheds just for men or can women enjoy them too?
I think sheds should be for everyone – men, women… literally everyone. The best thing about them is that they don’t discriminate. I often think that public lavatories are quite sexist, because there are some that men can go in, and some that women can go in, and some that disabled people can go in, but none that everyone can go in. I have never seen a shed with a sign on the door that restricts entrance to one or other of the genders. Thank goodness for sheds!

Confessions of a Chatroom Freak by Mr Biffo is out now from Friday Books and you can buy it here.
Posted by Alex Johnson at 8:30 AM