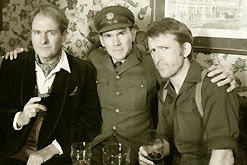 I'm rather late to the party with this one so apologies. Hut 33 is a BBC radio comedy set in Bletchley Park in 1941. It focuses on three codebreakers forced to share a wooden hut as they try to break German ciphers. Unfortunately they hate one another. It features Robert Bathurst and Olivia Colman and is rather good. You can listen again to the final episode from the BBC web site here.
Posted by Alex Johnson at 9:57 AM