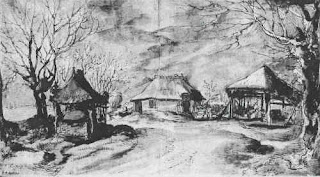 The authoritative monograph on sheds as art has still to be written. Of course there are many sheds, huts and cabins featured in works of art. An excellent collection for example of haysheds (such as the one pictured left by Peter Paul Reubens) can be found at the remarkable Hay in Art database part of a spectacularly extensive blog all about hay put together by Alan Ritch. 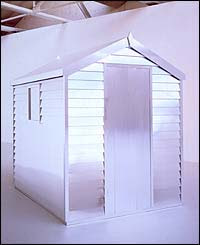 However it tends to be sheds as installation artworks that stick in the memory. For example John Frankland's Untitled (Shed) from 1994 (pictured left) which is currently on display at York Art Gallery. My former colleague at the York Evening Press Charles Hutchinson described it like this: "It inverts everything we traditionally associated with the common or garden shed. Instead of being rough, muddy, humble and full of yesterday's failed cuttings and string, it is coated in laminated polythene, as perfect and shiny as American models' teeth and just as empty."

An example of shed as public art is LightShed by Liz Magor in Vancouver (pictured right). Gordon Price describes it at his blog as a "homage to the boatsheds that used to line the banks of Coal Harbour when all this land was railyards and industry. She made a half-scale replica, impressed each board in sand, cast them in aluminum (even down to the crust of shells), painted them silver and then re-assembled the piece, along with lighting that makes it glow at night. It makes a for a wonderful contrast with all the slick glass towers that provide the post-industrial backdrop."

More recently, shedboatshed (pictured below) by Simon Starling famously won the Turner Prize and you can read more about it at the Tate Museum's web site here. Starling says he received a wonderful poem about his shed - which he found on the banks of the Rhine, took apart, turned into a boat which he sailed to Basle where he reassembled it as a shed - from someone in St Albans, but it wasn't me. 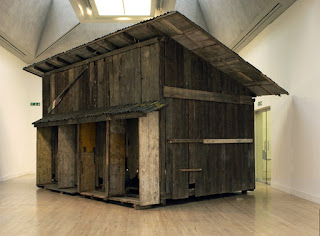 Other famous artists have found success with sheds too. For Cornelia Parker's Cold Dark Matter: An Exploded View she blew up a garden shed (pictured below). As she explains on the Tate's web site: "From seeing explosions on the news and all the time in films you sort of think you know what they are, but really your firsthand knowledge of it is very limited. I realised I'd never walked through the detritus of a bombed-out building." 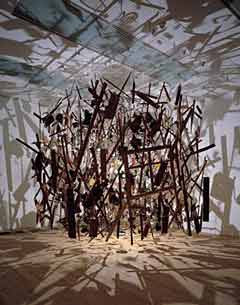 Unsurprisingly given her architectural bent, Rachel Whitread has also taken garden buildings as inspiration, in her case for Negative Shed, pictured below. At Martian FM she comments: "The fuss surrounding my piece called House, for which I had cast a real house and then as it were turned it inside out, was sometimes distressing, though the money wasn't bad. Here I return to the notion of 'anti-space' and oppositeness with a work that questions all those preconceptions about planar integrity and single-storey living. In order to negativise the building it is necessary to create an ionised 'bubble' around the object and then polarise all the individual molecules. It is very time-consuming and quite costly, which means it's definitely Art. 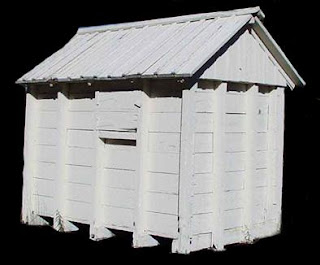 Maybe the most famous shedloving artist is Tracy Emin. Sadly, her The Last Thing I Said To You Is Don't Leave Me - a blue Whitstable beach hut (pictured below) which she bought and reassembled with photographs of herself taken inside the hut - burnt down in the big Britart fire. 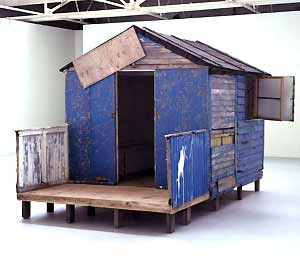 Emin also took part in The Other Flower Show put on in 2004 at the Victoria and Albert Museum and a fitting finale to the post since it brought together eight contemporary artists and designers who all designed a garden shed. All their work is online at the site - including Tord Boontje's chill-out den on stilts pictured below - and it's well worth taking a look. As the V&A put it: "There is something quintessentially English about a garden shed. It implies far more than simple garden storage: shelter at a rainy garden party, an enthusiast's workshop, a place for retreat, or perhaps for something more untoward..." 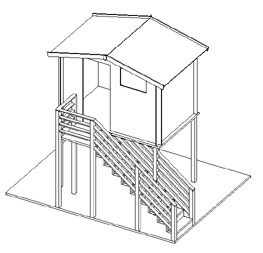