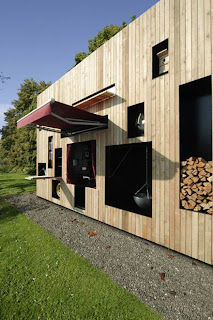 Most garden offices also carry more than a whiff of the potting shed about them (paint pots and seedlings are as much in evidence in mine as modems and laptops). But some are whiffier than others. The Walden for example, which is made from spruce and larch and named after Henry David Thoreau's famous walk in the wild. Designed by Nils Holger Moormann it has plenty of storage space for gardening tools, firewood, birdhouse and even a 'swinging cauldron' (I've always wanted one of those), but there's also plenty of room inside the cabin structure and even an upper level. 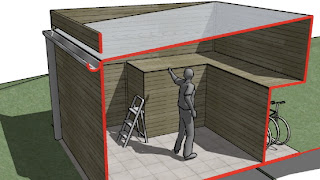 More shed than garden office, but also a look to the future, is the aptly-named FutureShed from the eco-friendly designers Serge de Gheldere and Francis Vanhoonacker of Futureproof/ed. Not only is the wood toxin-free and earth-friendly, but the designers say they have: "aimed for a striking but serene form so that you won’t want to hide this shed in the back of your yard." Which means an interesting translucent roof structure, sliding doors and a general feeling of space. There are lots of interesting photos and a video on the site so you can nose around.
Posted by Alex Johnson at 9:38 AM