Building a garden office with straw 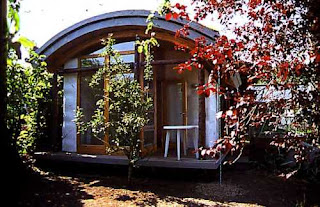 Just as gardens and grass go together, so do garden office sheds and straw. There are now increasing numbers of smallbuild examples of this popular building material including this Straw Bale Office designed by Gaia Architects in Perthshire. It's a 30 square metre garden office with a curved glulam roof on eight poles braced with stainless steel shipping fixings. The project has been developed using almost entirely local, natural and reclaimed materials, such as untreated sheeps wool insulation, straw bales for the walls covered in lime harling and limewash, sharpened hazel twigs, clay-straw mix filling, reclaimed douglas fir floor boards, woodwool and a reused gas pipe as a window.

The Strawdio is a music studio built of straw in the south west of England. Owner Piers Partridge has documented the build in an excellent online journal on the site and also included detailed costings and plans. The foundations are concrete block and natural stone on compressed scalping with a reclaimed pine board floor and underfloor insulation provided by straw bales sawn in half and wedged between the joists. Straw bale walls are finished with three coats of lime plaster inside and out and the whole thing is 6 bales high at the front, 7 at the back.

Another great example of a straw project from start to finish is chronicled at the
Build it with bales blog where a one bedroom straw cabin has been built on a park home chassis in East Yorkshire. It has renewable electricity, solar hot water and an environmentally friendly toilet system and its makers believe it to be the first mobile home in the world made from straw. You can even book holiday accommodation here. More details on the site.