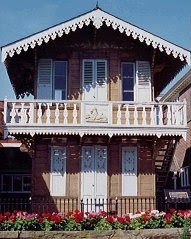 Following the first popular Celebrity Sheds post here is a second helping, focusing on writers:
* Louis de Bernières, author of Captain Corelli's Mandolin who actually had the first draft of a novel pinched from his shed
* Charles Dickens, whose enormous Swiss chalet 'shed' where he wrote Edwin Drood and others, can be visited at the gardens of the former Charles Dickens Centre in Rochester
* Jilly Cooper, who writes in a gazebo at the bottom of her garden
* Jeanette Winterson whose shed you can read about here

And finally one who isn't a fan as reported in the Daily Telegraph
* Robert Harris, who says "I am anti-sheddist. I couldn't work anywhere cold and nasty. I like the background noise of life going on."
Posted by Alex Johnson at 12:25 PM