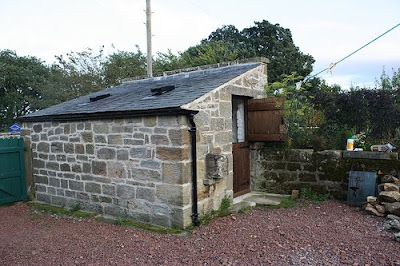 Stephen Waddington, the managing director of Speed, a London-based PR consultancy relocated with his family from London to rural Northumberland 18 months ago and now spends three or four days a week working in London and the balance from home. Here's how he shedworks in his own words:

"At home in Holystone, Northumberland, we’ve just completed the conversion of an old shed into an office. The building stands alone within the walls of our farmhouse garden. It’s approximately 200 years old, maybe older, and during its lifetime has been a pig shed, a kennel and a garden store.

"We originally considered buying a commercially built office-shed to parachute into the garden but National Park planning restrictions meant either restricting the size of the project or engaging in a lengthy planning process.

"Breathing new life into an old building seemed like a good idea. But even so the planning authorities placed conditions on the project and insisted that work was completed in sympathy with the history of the building. 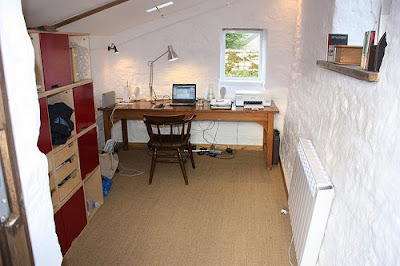 "When the floor was dug out to insulate against the northern climate an archaeologist had to be onsite to monitor progress and check for anything of historical importance. The 1m thick stone walls have all been pointed using lime and painted internally with line wash. And the roof has been replaced, insulated and sheet glass roof windows replaced with purpose made fittings.

"The office is now fully kitted out with broadband, electricity and heating. It has its own monitoring system and alarm which is monitored via an underground Ethernet link back to the farmhouse. I’ll stick it on Twitter before long. Converting the farmhouse is the next job."

Monday's posts are sponsored by garden2office, the Swedish garden office specialists.Click here for more details.
Posted by Alex Johnson at 9:14 AM