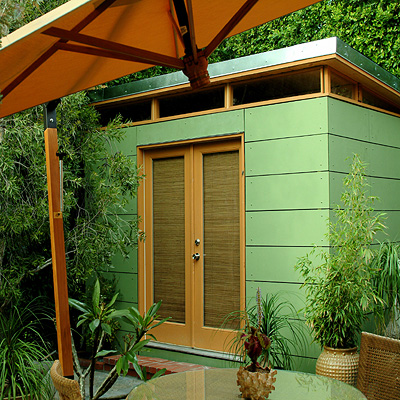 Last week I wrote about the minor firestorm when US-based trendwatchers Springwise picked up on the growing trend of garden offices. I'm now searching around for US garden office/shed suppliers and my first pick is the enjoyable site at Modern Shed, the brainchild of designers Ahna Holder and Ryan Smith who run Seattle-based Grey Design Studio. Their Studio Shed includes a 36" glass door and a 30"x30" operable window, with insulated floor, walls and roof. The walls have a pre drilled wire chase and are covered with finished maple plywood. There is a choice of floor colours to pick from and there are optional decks that can be added to the shed to extend the room to the outside. All exterior parts come pre-painted.

I was particularly interested in the faq section which includes 'Can the sheds withstand hurricanes?', 'What is the shed's snow load?' (apparently the sheds are designed to hold 25lbs per square foot of snow which is ok for about 85% of the United States) and 'Do you ship to Puerto Rico?'

It's a nice-looking beast and the site - which as you'd expect from designers looks very attractive - has plenty of pictures of how people are using their sheds. It's included on the suppliers' list on the left, but perhaps a new non-UK list is in the offing?
Posted by Alex Johnson at 11:38 AM