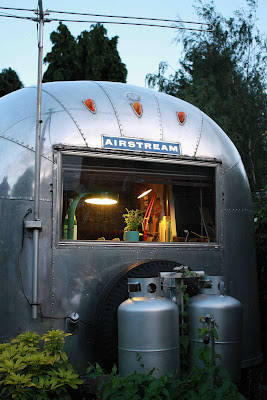 In August 2003 my first little girl Gracie arrived on the scene, writes Chris Haddon of Media Pie. After two weeks of paternity leave it was time to go back to work and during the journey home in the small hours amid the Central line chaos my decision was made. If I wanted to see my children grow up I needed to start up on my own. Trying to convince my partner Emma who was on maternity leave at the time was the next step. Granted: going from two good salaries to none with a new baby now in the equation was maybe a tad risky...... but we took the risk and luckily it turned out to be the right decision.

My business Mediapie officially started in January 2004 from the mezzanine floor in the lounge of our Victorian one bedroom flat - not the ideal office environment but we somehow managed and the work started coming in. Imogen our second child arrived in February 2006 so it was time to move. 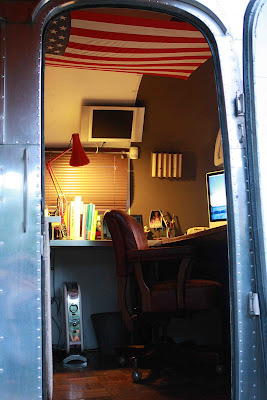 Due to the ever rising noise levels an office in the garden seemed the ideal solution. I had looked at elaborate sheds to convert into an office but I really wanted something a bit different from the norm. Ever since I can remember I have loved American trailers so I started looking around at the possibility of buying an Airstream and converting it into my work space. I found one on ebay in Connecticut USA, a 1963 Globetrotter. It was perfect and after a lot of effort trying to convince the owners that I wasn't a crazy English guy and I was totally serious and I really did want to ship it over to the UK, it finally arrived at Southampton and after a couple of months of hard work I had converted it into my design studio.

Now my journey to work consists of opening the back door and walking the few yards to my office – this giant glistening design icon standing pride of place in my garden. Clients are impressed when they come round for meetings and it's a good marketing accessory. During the summer I have air-con to keep cool and for the winter months a large chocolate lab can be found sprawled in front of the cast iron wood burner relishing in the heat... it really is my perfect space. 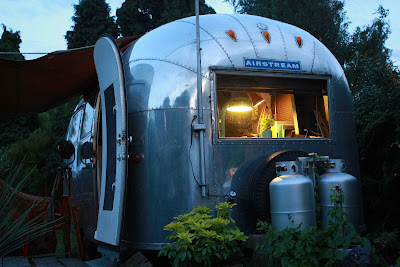