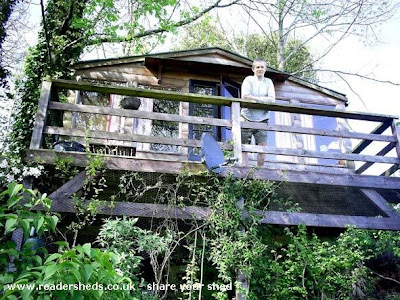 The Kite Cabin, owned by Steven Harwood from Llandysul near Carmarthen, West Wales. "I entered Shed of the Year because I feel I have a very special shed in a very special place," said Steven. "The location is unbeatable in my opinion with amazing panoramic views. It is surrounded by nature including kites, badgers and various birds. It is such a useable space and is not pre-ordered like so many sheds these days. It is a realisation of my idea and I love it. I hope that my cabin will be an inspiration for others and what can be done in an otherwise dead space."

Steven's prizes include a year’s supply of cheese from the Cheeseshed.com, a £50 voucher from Wyevale Garden Centres, a unique shed cushion and a wind-up Trevor Bayliss radio.

Uncle Wilco, organiser of Shed of the Year said: “This is the third year we have run the competition and each time I am astounded by the quality of the sheds that our sheddies create, they put everything into it. From off-the-shelf sheds that the sheddie have decorated and turned into their own escapes, to hand-built ecosheds and workshops, the range of talents of the British public is unbelievable.”

The judges of Shed of the Year commented:

Sarah Beeny, TV property developer."The shed quality gets better and better each year - it seems more and more people are embracing the joy of sheds! Though I was tempted by Grumpy’s Palace as it looks just like my office, The Kite Cabin was perfect! Well done!!"

Chris Evans, TV personality and Radio 2 DJ: "Grumpy's shed was a great shed but nothing that nice and welcoming should be called grumpy - I'm saying next year change the name and you’re in with a shout, son. The disco shed so nearly got my vote for obvious reasons - DJ love etc - but let's face it, it's not a shed, it is in fact a vehicle born out of the most extreme capitalist culture and although, whilst spreading music, lights and fun where ere it may come to rest, pitch up and plug in, it is nevertheless, at its very core, a money-making wooden machine on wheels. In my opinion my favourite is the delightful, delectable, cool yet not pretentious - Dingly Dell. A shed indeed fit for a princess."

Alex Johnson, Editor of Shedworking.co.uk: "National Shed Week once again showcases the many ways in which the shed concept is central to the lives of millions of people, not just in the UK, but around the planet. The finalists have again shown that there is really no limit to the ways in which we can use the smallest room not in the house. Surely it's time that television property programmes stopped concentrating on 'grand designs' and started focusing on 'small wonders'?"

Rico Daniels, TV’s Salvager: "Of all the sheds featured the Kite Cabin is the one I would most like to own and spend time in. The construction is both unusual and visually appealing, making novel use of a difficult plot. It creates the sort of hideaway that would lift your spirits as you approached it and again as you enjoyed the interior and the views it offers . It is well-appointed and low-impact making good use of alternative technology and the ease with which it sits in the landscape makes it a real contender in my view."

Tim McNeil, Shed of the Year 2008 winner: "What a difficult job with so many beautiful sheds. You have to admire the eco shed for the amount of work that went into it as carefully recounted by the owner and the substantial building he created and the ecological case. However, the one that really took my breath away was Kite Cabin. I would love to have designed it and built it - and to own it must be just fantastic."

Tony Rogers, Shed of the Year 2007 winner: “The Kite Cabin -It's all his own design and build too. The view out down the garden is fantastic. With a TV, satellite, stove, carpets, video, telescope, toilet and beds. What more could you need. Maybe a phone to order the take-aways! Do they deliver take-aways to the top of the garden in West Wales?