Music While You Work - Christmas 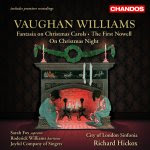 I like listening to carols but find that I end up singing them and doing no work. So as a better combination I have two largely instrumental recommendations for the coming weeks. The first is from Chandos, Vaughan Williams: Christmas Music which includes premiere recordings of his Fantasia on Christmas Carols (based on the traditional English carols ‘The Truth sent from above’, ‘Come all you worthy gentlemen’, ‘On Christmas Night’ and ‘There is a fountain filled with blood’) and On Christmas Night which also features some very familiar carols, as well as the first CD version of his nativity play The First Nowell. Marvellous singing from Kathleen Ferrier Award winner soprano Sarah Fox and big name baritone Roderick Williams as well as the Joyful Company of Singers all under the baton of VW specialist Richard Hickox.

Secondly, at budget price, from Naxos is Victor Hely-Hutchinson: A Carol Symphony which contains the famous work used for the television and radio productions of The Box of Delights as well as Bryan George Kelly’s Improvisations on Christmas Carols, Peter Warlock’s Bethlehem Down, Philip Lane’s Wassail Dances and Patric Standford’s A Christmas Carol Symphony.
Posted by Alex Johnson at 9:31 AM

Labels: Music while you work