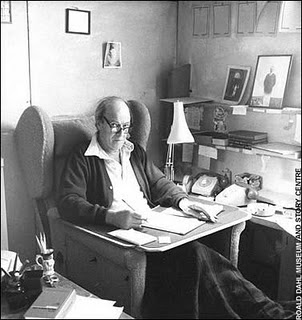 The debate over the rescue plan for Roald Dahl's writing shed has encouraged a great deal of talk about shedworking in general in the media as well as getting people to share their stories of Dahl: among those who contacted Shedworking was a reader whose Aunt used to work for Dahl in Great Missenden.

My favourite piece this week was by publicist Mark Borkowski who wrote about the effects of visiting Dahl in his shed:


Young and impressionable as I was, I felt inspired to build my own similar work space, and for a long time I found it valuable. Cordoned off at the end of my garden with nobody in my face, I used my brand new outdoor nest for a number of years in coming up with some of the crazy stunts and campaign ideas I remain most proud of to this day, from clown auditions to elephant- accompanied alpine hikes.

Creativity needs space, whether it’s conjuring up PR gold or scribbling visions of gargantuan, insect ridden fruit reminiscent of a homeless former greengrocer’s terminal acid binge. As a result, these spaces take on a kind of sacred quality- they fascinate because they provide a visual and spatial signifier of the moment of genius.

The story doesn't have a happy ending - Mark left the garden office behind when he moved house and it was subsequently flattened by a falling tree.

One of the other positive things to have come out of the whole story is that various television crews have been inside the shed so that we can have a better look at it ourselves. Here's the team from ITV's London Tomight having a nose around.