The Dahl shed story has been reported (and frankly often misreported) all around the world now including by the Sydney Morning Herald, the New Yorker, and the Los Angeles Times so it's good to see that The Roald Dahl Museum and Story Centre has responded, politely, to the rumpus. Here are the key points:

1) The £500,000 relocation figure will cover not just the detailed move of the interior to the museum but also the construction of a major new interactive exhibition gallery for visitor and school groups

2)No financial support for the project was ever expected to come from the public. Instead, the Museum is looking for help from organisations which "support museums, literacy and creative education, as well as companies involved in the publishing and other licensing of Roald Dahl’s work".

3) The plan is for the interior of the hut to be installed in the Museum and open to the public by March 2012. 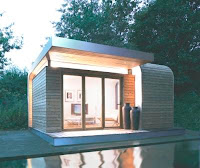 Thursday posts are sponsored by Atelier garden studios which are sustainable, stylish, flexible, functional and future proofed
Posted by Alex Johnson at 11:00 AM